Open Source is a classic metroidvania with a twist: the player must reprogram the game. At any time, the player can pause Open Source and edit the game's actual source code. The game plays like MegaMan X with unique code-based puzzles!

This game requires the use of a keyboard and mouse.

This game was created as a submission for the Meta Game Jam.

The idea was to create a game that allows the player to play a game while manipulating its source code.

The game seems to have some potential as a learning tool.

Press TAB to change to the console.

Type the following and press ENTER.

The console should output a string that looks something like this:

This output is a detailed report of all of the values that exist inside of the scene object. It is in a format called JSON.

If you right-click on any game object, the console will output a variable. You can use that variable to access the game object.

Right-click on your player avatar. Notice the following output:

Interesting. Let's take a peek into the player object. If you type in player in console, you'll see something like the following output:

Let's change some of these values... Try the following commands in the console:

Played it just for a while so far but definitely liked the concept. 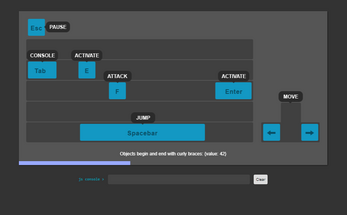